When the BBC’s New Broadcasting House (1976) was demolished on Oxford Street in Manchester in October 2012, thousands of passers-by witnessed the violent death of a large building. Over the course of a few weeks, the building was transformed from ruin to rubble, and thence into just one more unimaginative (yet ubiquitous) Manchester car park. Demolition is perhaps the most commonplace form of what Marshall Berman has termed ‘urbicide’, that is, the deliberate destruction of the built environment of cities. And yet it’s certainly the most ignored: buildings come and go, their unmourned deaths usually heralded by long periods of decline, marked by the failure to find new uses for obviously defunct structures.

Deliberately contemplating buildings undergoing demolition is a transgressive form of looking. Seeing a building being killed is a discomforting, even shocking experience. Buildings – even long-empty ones – are essentially anthropomorphic structures, designed to be lived in and to be shared spaces of existence. Gaze at a building being demolished long enough and you begin to feel the pain of that death: its broken walls, gaping windows, and twisted metalwork eliciting a kind of bodily sympathy in the viewer. The violence of demolition also contrasts with the serenity of the ruin. Where, with the ruin, nature is allowed to re-establish her former claims to the building, producing (at least for a time) a peaceful sense of equilibrium, the building undergoing demolition is violently annihilated by the very tools that raised it up in the first place. No wonder that most demolitions are shielded from public view behind makeshift screens.

Representations of demolition are thus transgressive in that they both expose and forestall the violence of architectural annihilation. On the one hand, photographs articulate the half-demolished building as somehow still existent, even at the moment of its death – the architectural equivalent of a coroner’s report perhaps; on the other, the exposure of the building’s insides during demolition produce revelatory views of architecture – that is, glimpses of the otherwise invisible ‘soft’ interiors (perhaps most powerfully represented in Rachel Whiteread’s spectral sculpture House (1993)). 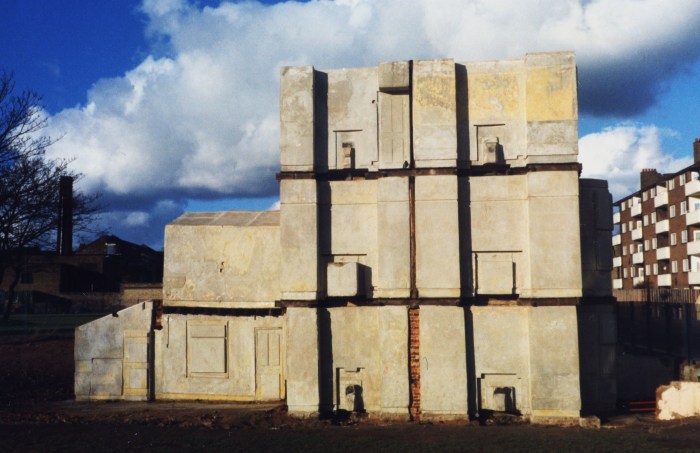 Demolition also suggests new kinds of urban aesthetics, given widespread expression in nineteenth-century London when modernisation produced unprecedented scenes of urban ruination. So, when the Hungerford Market near the Strand was demolished in 1862 to make way for the Charing Cross Railway Station (1864), the Illustrated London News found in the resulting scene of destruction a powerful new aesthetic of modernity: a vast, dark absence flanked by houses on the brink of destruction, and the shadow lines of staircases, ceilings and floors imprinted, like Whiteread’s House, on their remaining walls. For the Illustrated London News such destruction produced a great deal of visual interest, in effect a new form of urban picturesque; yet in representing such a scene at all, the newspaper also exposed the urbicide that is common to all forms of modernisation. Yet, as Lynda Nead has argued, the illustration is also a permanent representation of the archaeology of modernity, revealing that the latter is always haunted by the spectral presence of the past, no matter how quickly it tries to obliterate it with the promise of the new.

12 thoughts on “Accelerated ruins: the aesthetics of demolition”